In 'The Self-publishing Manual', author Dan Poynter advises non-fiction book writers not to use jargon (words that are unique to a particular audience) because it runs the risk of turning the reader away.

Funnily enough, I had never really thought about the meaning of the word until now. I somehow had it lumped in with slang and lingo - words I generally think of as the common tongue, not something "unique to a particular audience".

Explore with me, if you're so inclined, the actual meanings of these words, so we can separate them in our minds, forever liberating them from vernacular verbosity.

Though they have many things in common, there are differences between JARGON, SLANG and LINGO. With a common thread linking them all together, you might picture this relationship like this: 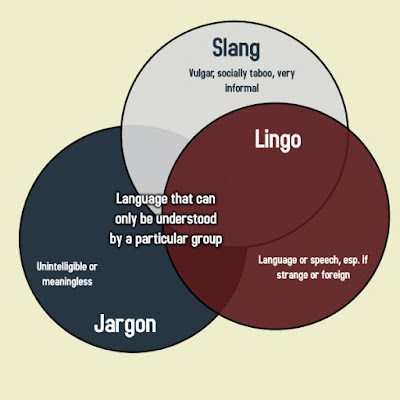 There is a zone where the three words clearly cross over, but each has its own particular slant. Dan Poynter's advice would seem to apply to all three because a non-fiction book writer wouldn't usually want to come across unintelligible or meaningless, strange or foreign, vulgar, socially taboo or very informal.

When it comes to "language that can only be understood by a particular group", the obvious reason for avoiding that is in case someone not deeply familiar with that group tries to read the book. If only some of the wording had been chosen differently, that person would have been a potential buyer.

In other places, such as email newsletters for businesses, clubs and social groups, magazines (especially for the younger generation) and even advertising, the use of jargon can be an important feature. It just depends on the target audience.

But that's a topic for another blog.

Posted by Amanda Greenslade at 3:06 AM