Wrath of the Lich King 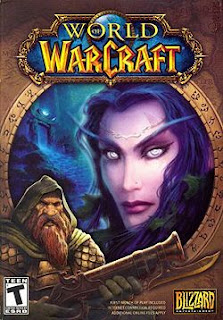 For those of you who don't keep up with the gaming scene, a phenomenon called 'Massively Multiplayer Online Roleplaying Games' has gained in popularity over the last few years. There are dozens of MMORPGs out there, but none quite so popular as Blizzard Entertainment's World of Warcraft (WoW). Set in the high-fantasy world of Azeroth, WoW is a jaw-dropping display of creativity and game design genius.

More than 11 million people around the world pay a fee (of around AU$20/month) to play World of Warcraft (more info. on Wikipedia here). And on November 13, 2008 the team over at Blizzard released the second expansion for the game - Wrath of the Lich King. Like most roleplaying-games, players level up and are able to 'gear' their characters with bigger, brighter and better armour and weapons. The entire game is quest and reward based, meaning that you walk around in this amazing world talking with npcs (non-player characters) and receiving quests to achieve certain objectives. When you return having completed the quest you are rewarded with gold, items, reputation points etc.

The original WoW, released November 2004, allowed players to go from level 1 to 60 at which point there was 'end game' content that only level 60 players were powerful enough to do well in. The first expansion The Burning Crusade was released in January 2007 and enabled players to reach for new heights with level 70. Along with a totally new continent to explore and the ability to fly around, it also introduced greater reputation-based rewards. One of the top rep rewards was getting a Netherdrake mount, a player's very own dragon to fly around the world on (called a 'flying mount'), pictured below. 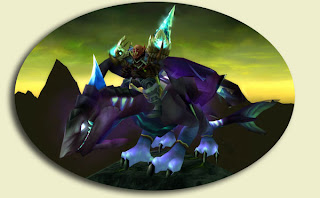 Wrath of the Lich King allows players to level to 80 and it has again raised the bar on what MMORPGs can do. The world is bigger and more complicated than previously. Factions, races and species war both within and without their own groups. In WotLK the old saying 'the enemy of my enemy is my friend' isn't always true. One major improvement in this expansion is the dynamic terrain. Without knowing much about the mechanics behind this or whatever design processes were involved, I can simply say that in-game the terrain is mind-blowing.

There are passes along the edges of cliffs, mountains that rear into the heavens, yet a persistent wanderer can find a way to cross. There are staggering heights from which to fall (if you have a fear of heights beware Howling Fjord!).

There are a lot of people I talk to who say they would love to play World of Warcraft, but they know that it will hook them and addict them so much that they won't want to keep doing everday things they have to do like go to work! Blizzard itself seems aware of this phenomenon when on load-screens it says things like:

"Bring your friends to World of Warcraft, but don't forget to adventure outside Azeroth with them too!"

"Take all things in moderation, even World of Warcraft"!

But that's a topic for another blog.

Posted by Amanda Greenslade at 2:00 PM

Good blog. Nice to see you that you like a movie Two Brother which took place from country Cambodia at Angkor area. I like this movie very much.

Amanda, aren't you reviewing games any more? The ones you did a few years ago still get hits on The Specusphere!