Why do people love Edward Cullen? 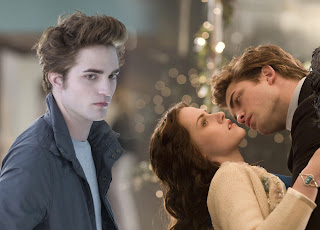 Edward Cullen is one of the main character's in Stephanie Meyer's teen angst vampire romance saga, which begins with Twilight. I haven't read anything in this genre before now, and I must say I did enjoy the series. The characters in Twilight connect with each other, and with the reader. Instead of being tormented by what I read on the page, despite the angst the characters go through, I felt pleased and gratified by each turn of events.

At one point, Edward must face the fact that the love of his life, Bella, has feelings for another man, albeit different feelings than the ones she has for Edward. As I was reading this section of the saga, I was preparing for the onslaught of jealous rages, hurt and bitter disappointment you would expect. But it never eventuated. Instead, Edward's love for Bella and her best friend Jacob outshone the jealousy, and he gave her the space she needed to work out her feelings for them both.

Of course Bella freely chooses Edward, the only man she has ever loved with such soul-shattering loyalty. It's so easy for readers to love Edward Cullen, but he's also frustrating because he's so perfect. People in real life simply aren't like that, so why put a character in a novel who is? It's like Stephanie forgot that little rule to give your characters some flaws to help make them well-rounded and believable. Or she wants us to believe that Edward's unique character, prior to being bitten, lent him to be able to use the gift of immortality to work out how to be a better person than most.

In her videos on YouTube, Stephanie Meyer says she doesn't know why her series has been such a hit, other than the fact that she loves her characters and other people do too.

The character of Edward can be used in discussions on morality, humility, selflessness and love. He goes from cold to hot in a heartbeat, but its only because he wants to hold himself back from Bella to protect her. For someone with no heart, he has the most love to give out of all the characters in the book. One of my favourite lines in Twilight the movie is Bella's,


"Your mood swings are giving me whiplash."

It is Edward's tormented sense of self-deprecation that leads him to leave Bella for a time. This is the only moment in the saga where Edward causes another person so much pain, but, as Bella realises later, he was only doing it out of his great sense of love and selflessness, wanting to protect her from a life of danger and evil.

Even after he returns to be by Bella's side, he remains conflicted about her desire to become an immortal like him. He is afraid that vampires have no soul, or no afterlife. But Edward is one of the most soulful characters of all, and his hesitation and torment about Bella demonstrates the depth of his soul. He is almost perfect in every way, almost godlike (as Bella describes him).

Edward is conflicted about the sins of his past—even though Carlisle was the one who turned him, Edward admits to having killed humans before. He finds it his duty and his burden to work out his redemption by being the best that he can be. Perhaps there is a little of Edward in all of us, as we each seek our own personal salvation.

Copyright in images I have made for this post belongs to the film producer/photographer etc. This is purely a work of fan-art.

Posted by Amanda Greenslade at 2:51 PM