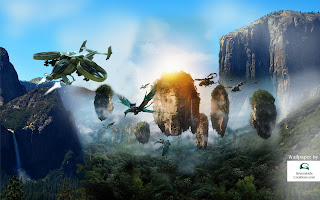 It’s not very often I come out of a movie speechless, but it is challenging to put the way I felt about Avatar into words. To put it mildly, I had several * BLINK * BLINK * moments trying to convince myself I want to be plunged back into the real world again. Coming out of the Avatar cinema, you kind of feel like the main character Jake who is forced to wake up from his dreamlike experience in the body of a Na’Vi (his avatar).

A breath-taking visual feast, Avatar might be described as World of Warcraft and Mech Warrior meet Last of the Mohicans and Fern Gully. It combines some of the most popular elements from fantasy and sci-fi stories of all different mediums; comics, novels, movies and especially computer games. With so much to offer Generation Y and younger--the digital natives who thrive on virtual realities--you might think Avatar cannot deliver on storyline and character development as well. But it does.

There were so many interlinked components to the film, it seemed likely to fail at one or more of them, but Avatar delivers the goods. Setting aside the jaw-dropping CGI and 3D technology that made it seem like the movie was happening right in front of you, the characters and storyline are truly riveting. It’s not a new story—the nasty boys with the big guns want to kill the technologically under-developed natives and mine their ore—but it is vibrantly and uniquely told.

[Director James Cameron] wanted a picture as big as the epics of his youth, like The Man Who Would Be King or Lawrence of Arabia, and one that dealt with a similar clash of cultures. “A person comes in contact with a different culture and has to make changes,” Cameron explains. “He must change his perceptions, learn how to assimilate and prove himself within that new world.”

—Hollywood Reporter
In today’s staid environment of sure-things in movies (aka comic book and novel adaptations), Avatar is a breath of fresh air.

The forest scenes, creatures and the Na’Vi themselves are exquisite, providing an orgasm of colours and light for your eyes. I could barely blink when the wide open panoramas of the flux zone, with its floating islands and waterfalls came into view.

About 95% of the visual effects were done by WETA, the New Zealand based company that brought Lord of the Rings to life and put NZ on the map for visual effects wizardry.

Cameron says WETA has the largest computer “farm” in the world. It ran continuously for three years for Avatar, as the staff in Wellington grew to nearly 900, even with ILM in San Francisco doing a few extra shots.

—Hollywood Reporter
The battle scene at the climax of the movie is indescribable. Who would have thought that with all that was happening on the screen, you could still keep up and feel intimately engaged with what was going on? This is unlike Transformers 2, a movie which I felt went too far with the fast-paced action and enormity of what was happening on screen. Avatar balanced the close-ups and slow-motion with the rapid, distant shots perfectly.

As the soaring imagery of the end credits gave way to black, I turned to my husband and said simply, “Well, I think I have a new favourite movie.” Nuff said.

Avatar knocks The Matrix, The Lord of the Rings, Narnia and the Star Wars series right off their perches on my top slot, effectively saving me the embarrassment of not being able to decide on just one favourite movie. Avatar is it. Incredible. Bravo.


Here are some more free wide screen Avatar desktop wallpapers for your personal enjoyment. Designed by me, so I thought it OK to add my logo for my Brisbane-based graphic design, layout and email marketing business Greenslade Creations. 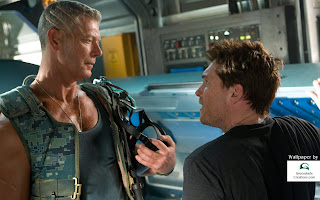 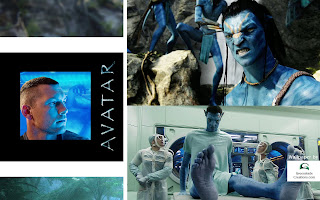 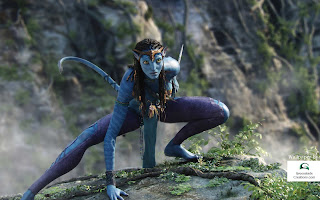 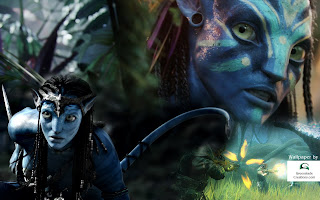 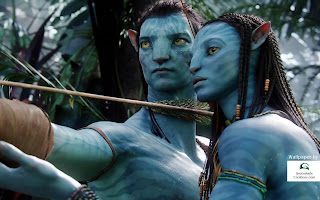 Posted by Amanda Greenslade at 4:51 AM

Ooh - can't wait to see it! Hopefully in 3D one day next week, when I'll be back in Perth.